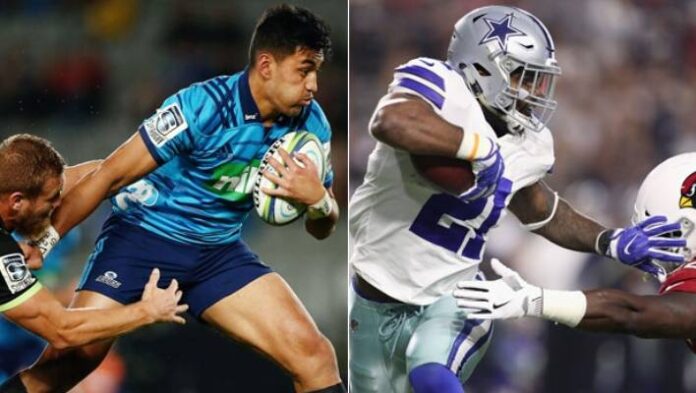 It’s time to admit that the rest of the world got the naming right: Football sounds like a description of a sport that primarily involves moving a spherical object around a field mainly using your foot. That there is such a sport that needs to be described as ‘American football’ to set itself apart suggests that there would only be a slight alteration to these rules. However, that wouldn’t be the case.

If you started to watch the most popular sport in the United States without knowing what it was called, the chances you would come up with the word ‘football’ is extremely low. Not only is the ‘ball’ more of an oval shape than a sphere, but only one of the players on the field actually kick the ball with any regularity. The main method of traversal is holding, throwing, and catching the ‘oval’, all of which would earn you a foolish penalty in real football.

So why the similar names? Is there anything in the rules that can make sense of its differences? Could football hypothetically sue American football for stealing all their best ideas? (Side note: this would make for a very amusing American web loan lawsuit.)

Let’s find out because, for all its differences, American football is quite exciting in its own right.

Start with eleven men per team on the field, which is roughly one hundred yards long. Already we have a good example of why these two sports are at least joined together in the name. You need the same space and amount of people to play them. In addition to that, each team has their side, which they must defend, and halfway through the game, they switch.

While we typically take these facts for granted, this bare-bones similarity shows why the two sports could hold onto familiar names. It was as if you could imagine a bunch of players getting together on the field long ago and deciding that day whether they should play ball with their feet or their hands.

This is actually what happened because there is absolutely a sport called Handball, which has a playing style which in some ways overlaps with American football, namely the throwing instead of kicking.

However, its heart truly belongs to International Football, because there is a goalie defending a net (that you have to throw the ball in), and there is no tackling. Although, because just being able to run with the ball can result in it just becoming a sprint, one of the chief rules for handball is that you are only allowed to take a certain amount of steps when you have the ball before having to throw it to another player.

That we have to remind you that Handball is even a thing is an indication of how its popularity doesn’t compare to these two bigger sports. However, it is important to acknowledge its role in shaping American football.

While football and handball are designed to strongly be non-contact (with varying degrees of penalties for players who tackle, slide into, or kick or other players to disrupt the play), American football is very much a contact heavy sport. As European settlers arrived in America over several centuries, they of course brought customs and pastimes with them, including football and handball (as well as cricket, which would slowly morph into baseball). While wrestling had been a sport since ancient times, the closest sport that adds physicality to American football is rugby, which originated in England in the 1700s.

This was essentially a much more violent take on handball, where players line up against each other with the ball (now oddly shaped) is placed in the middle, and there is practically a fight as each team smashes into each other (a scrum) in order to hold their opponents (mostly) in place so that one person who ends up with the ball can escape and tear down the field and touch the ball down on the end zone on the other side of the field.

Despite this chaos, scoring in rugby is much more frequent than football, but both end with plenty of exciting celebrations, both for the players and any of the spectators watching (which carry on long after the game has ended, including shots of alcohol and even visits to CT escorts).

The similarities to American football and rugby should be quite apparent now, especially when you add the fact there is the option of kicking the ball between two poles and setting up the scoring zones on each end of the field for additional points.

While football can boast that very little has changed over the years, American football can not nearly claim the same thing. While it should now be clear that American football is a mashup of International football, handball, and rugby, a refinement of the rules is a process that has continued right up to today.

Initially, some of these rules were meant to prevent serious injuries, because there used to be a ‘no holds barred style of play when it came to tackling (with plenty of dirty hits being no longer allowed). In Football’s early professional years (say, the first half of the twentieth century), it was expected that any player could kick the ball down the field when they were in danger of being tackled, but rules started to make that more difficult to do.

While in the past there would be players who could play multiple positions, increased specialization and strategy of the game meant that switching became a lot less likely, and that team rosters would instead expand. There are typically fifty-five players on a given professional American football team, and only eleven of them will ever be on the field at the same time.

What if a creditor pursues legal action against my business?

Why Working with Professionals Makes Sense When Exploring Dental Offices for...

Why do so many sports fans like to place accumulators over...