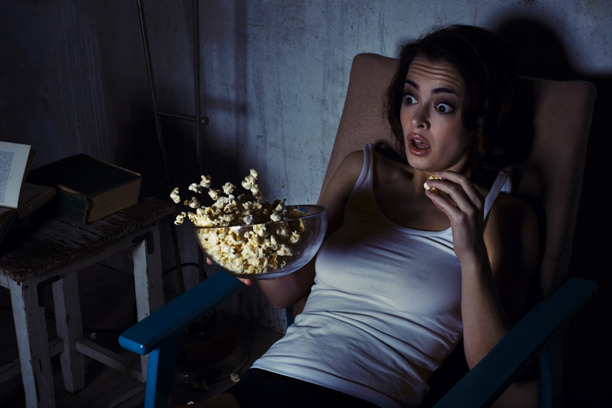 Perhaps the greatest compliment that can be paid to The Shining is that it was so perfectly lampooned by The Simpsons. Its version in season six’s Treehouse of Horror, entitled The Shinning, is a wonderfully funny parody of Stanley Kubrick’s movie.

Kubrick’s 1980 adaption of Stephen King’s novel has become famous for being famous, full of iconic moments. ‘Heeeere’s Johnny,’ where Jack Nicholson’s character cuts through a door using an axe, stands as one of the classic moments of this frightfully disturbing movie.

In our The Shining review, we will review the action, look at the movie’s initial reviews, and consider the lasting legacy of The Shining. Are you ready to enter Room 237?

“Come and Play With Us”

According to Roger Ebert, this movie is less about the ghosts and more about the energies it sets loose in such an isolated and desolate situation. Jack Torrance, played by Nicholson, takes over as winter caretaker of the Overlook Hotel in Colorado.

Here, alongside his wife and son (affected by psychic premonitions), he attempts to overcome his writer’s block. As the premonitions grow more disturbing and Jack descends into madness, we watch his mental unraveling in a state of terror and intrigue.

The action reaches a climax with a chase through a hedge maze, culminating in a truly iconic moment that has been analyzed and interpreted in many different ways.

Although it has become a favorite movie for many, The Shining was largely panned by the critic on its release in 1980. Far from being praised as a masterpiece, the movie received unflattering reviews from The New Yorker, The Guardian, Variety, and others.

The Washington Post described it as an ‘elaborately ineffective scare movie.’ Those simply looking for a “good scare'” were likely to be “disappointed,” said the Los Angeles Times.

Even though the critics were far from impressed, The Shinning opened to large audiences. As the years have progressed, many critics include Ebert, admire the movie while fans continue to watch The Shining in both fear and excitement.

As the cinematic world celebrated the 40th anniversary of The Shining in 2020, both critics and regular movie fans alike joined together to sing its praises. The Guardian, for instance, has changed its tone, describing it as “terrifying” and “as chilly and confounding as ever, a puzzle that may never be solved.”

In the end, the most important review of The Shining is one’s own. If you haven’t yet watched, you have the opportunity to see for yourself if the movie lives up to its hype. If you have seen it, do you remember the twins in the hallway? Well, here they are today.

The Shinning’s innovative filmography, inspired performances, and open-ended conclusion have made it a movie lover’s favorite for 40 years for a good reason.

Like this blog post of The Shining review? Be sure to check out the rest of our blog today for other great articles.

Try out restaurants that are top-rated in Singapore for a unique...

Upping the Fun Factor of Your Next Road Trip

What are the benefits of buying the cake from online delivery...

The United States Economic Outlook- Trends in 2019 and anticipated changes...