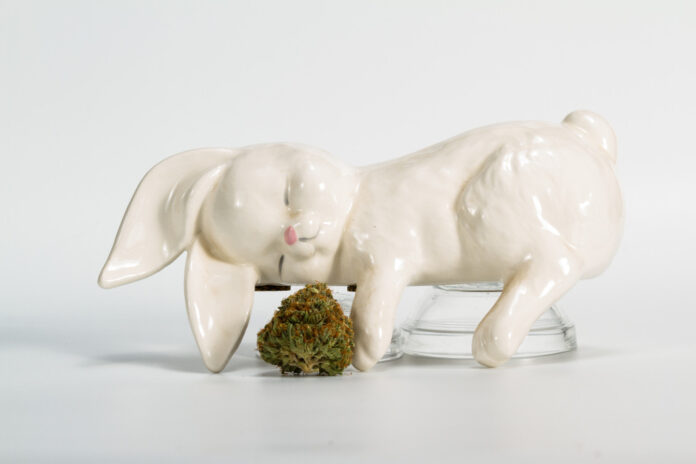 Sleep disorders are on the rise. According to the Centers for Disease Control, one-third of American adults don’t get enough hours of sleep every night, and over 70 million Americans suffer from at least one of more than 80 different kinds of disordered sleep.

Unfortunately, many people are turning to substances to help them fall and stay asleep, and cannabis is increasingly being used as a sleep aid. While cannabinoids can be useful in facilitating sleep in some circumstances, it is important to know what the drug does to sleep cycles and how to administer it for safe, successful sleep.

The Science of Stoned Sleeping

Many compounds within cannabis have sedative effects: THC, CBD and all sorts of terpenes. This is why so many people gravitate toward weed when they are struggling to sleep. However, marijuana’s effects on sleep go beyond the relaxation and drowsiness.

The primary effect of cannabis on sleep is that the drug reduces the duration of a stage of sleep called the rapid-eye movement or REM cycle. This is the period between full wakefulness and deep sleep, in which the brain remains active and vivid dreams take place. REM is an element of healthful sleep; without it, sleepers often awaken groggy and remain tired for the entirety of the next day.

A lack of REM can be useful for some sleepers who are plagued by distressing dreams. Those who suffer from PTSD, for example, might struggle to sleep because their dreams cause them to revisit traumatic events. Using cannabis to reduce REM can be beneficial for these sleepers.

However, for most people, the long-term lack of REM can be destructive to the natural sleep cycle and overall health. Thus, it is incredibly important that cannabis used as a sleep aid is deployed properly. As is true of any drug, users would be wise to consult a health care professional before attempting to use weed in any capacity but especially when using it to manage a health condition like disordered sleep. Even in places like California where weed is available recreationally, it is best for those with medical conditions to seek appropriate medical care.

Do: Microdose and Be Patient

Microdosing is taking exceedingly small doses of cannabis with the intention of avoiding negative side effects, especially the psychoactive ones. What constitutes a microdose will vary from user to user; some users with high tolerances might require more than 5 milligrams of THC to feel any effects, whereas those with more sensitivity might need less than 1 milligram. Generally, it is better to start with the lowest possible dose and increase incrementally, being patient to note any effects that manifest.

It is extremely tempting to use a lot of weed because at least then one can tell that the drug is working. However, overdosing THC is possible. Though not deadly, a THC overdose could impede on one’s attempt to gain restful sleep by raising the heart rate and causing paranoia and panic. Sometimes, THC overdoses are so intense that users visit emergency rooms for help calming down. Because an event like this can create even more anxiety and fear about sleep, it is best to avoid an overdose altogether by microdosing.

Do: Use a High-CBD Strain

Cannabis comes in different strains, which boast different concentrations of cannabinoids and terpenes. Though there are many compounds within cannabis that boost sleep, the best by far is CBD, which does not have psychoactive effects. Instead, CBD seems to influence the body to produce more of its own, innate compounds to regulate sleep in a more natural way. Plus, CBD is good for managing other conditions that can conflict with sleep, like pain and inflammation.

While some weed enthusiasts try to differentiate strains using terms like “indica” and “sativa,” the truth is there isn’t much meaning behind these terms. When Europeans first tried to classify the cannabis plant, they sorted tall cannabis plants into a different category from short ones — but modern genetic testing has found that regardless of the plant’s shape, its all weed. Users should all but ignore these terms and focus on cannabinoid content, instead.

Do: Keep a Sleep Journal

Finally, sleepers shouldn’t merely trust that the cannabis they are using are contributing to more healthful sleep. A sleep journal will help users track how they feel as they try to incorporate cannabis into a healthy sleep regimen; if the journal demonstrates that fatigue persists and disordered sleep remains despite cannabis, it might be time to look for a different sleep solution.

For something so important to human health and survival, good sleep seems increasingly more difficult to get. It might be time to try using weed as a sleep aid — but not before one learns how to use it the right way.

WHAT ARE THE DIFFERENT TYPES OF SYRINGES THAT ARE USED TODAY?

How to Effectively Manage Stress – The Eric Dalius Guide for...

Destiny 2: How To Start The Best Exotic Xenophage Weapon Quest

Celebrities sporting the same outfits – The “who wore it better”...

Digital Marketing Strategies to Boost the Growth of Your Start-Up