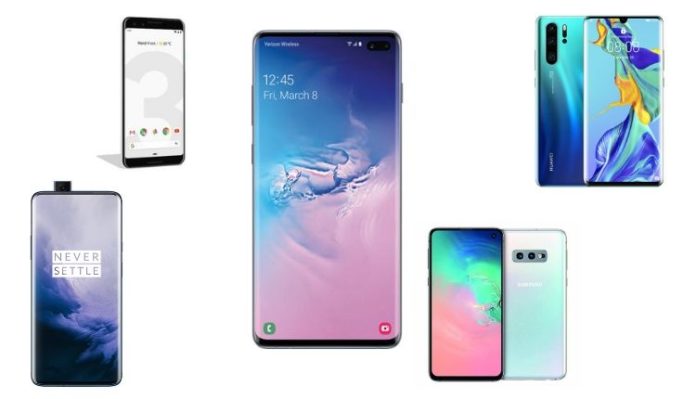 The development of the Smartphone is taking place at a higher rate. It might be confusing for choosing the smartphone. Every smartphone has its own quality and features. You have to select the smartphone in accordance to your need and budget. If you can get more features within the small budget then, why would you invest more? Here is the list of top 5 smartphones in 2019. These all smartphones were released in 2019 and are flagship smartphone. Understanding the features and technical specification before buying any smartphone is important.

Dozens of smartphone were launched in 2019. The smartphone can be compared according to battery life, best camera, stylus, memory, the performance of the smartphone, and finally the budget. You should also be aware of the OS on the latest smartphone and care about whether the smartphone gets the updates or not. Study and Compare the features and technical specification of these top 5 smartphones.

The Samsung S10+ could be the best choice if your budget is around $1400 for 1TB memory. The Price may vary according to the specifications and customization of the smartphone. It was announced in February and released in March. Its thickness is 7.8mm and weight is 198g only. It supports single nano-SIM or hybrid dual SIM (both stand-by), Samsung pay and has front glass (Gorilla Glass 6), back glass (Gorilla Glass 5), aluminum frame front glass (Gorilla Glass 6) and Ceramic body. It is IP68 dust/waterproof and has dynamic AMOLED capacitive touchscreen. Android 9.0 (Pie) is installed on this smartphone. The chipset of Samsung s10 plus consist of Exynos 9820, Qualcomm SDM855 snapdragon 855, Octa-core CPU, Have GPU consisting of Mali-G76 MP12.

It has an internal memory of 1 TB and also supports microSD up to 1 TB. It is equipped with triple camera 12MP (Wide), 12 MP (telephoto) and 16 MP (ultrawide). The selfie camera has two camera 10MP and 8MP. Fingerprint, gyro, accelerometer, proximity, barometer, heart rate, compass, SpO2, etc. sensors are included in this smartphone. It supports Wireless charging and has 4100 mAH inbuilt battery.

The price of Samsung Galaxy S10e is around $800. It has a multi-perspective and intelligent camera which consist of the dual camera; 12 MP (wide) and 16MP (ultrawide) camera. It consists of Selfie camera of 10MP. It has an inbuilt intelligent battery of 3100mAh which can share the power wirelessly to other devices like earbuds. Samsung Galaxy S10e supports Fast wireless charging.

Samsung Galaxy S10e has Cinematic Infinity Display which uses Dynamic AMOLED display with 16M color Depth, a fingerprint sensor for unlocking the phone, has Android 9.0 OS and uses Corning Gorilla 5 for the protection of Display. Its chipset consists of Exynos 9820, Qualcomm SDM855 snapdragon 855 and has octa-core CPU and Mali-G76 MP12 GPU. Its internal memory is 256GB and 8GB RAM.

The price of Huawei P30 Pro is around $1000. It has an OLED capacitive touchscreen with 16M colors. It uses Android 9.0 and has 8.4mm thickness with 192g weight. Huawei uses the HiSilicon Kirin 980 chipset with octa-core CPU and Mali-G76 MP10 GPU. It has expandable memory up to 256GB with the usage of Nano memory and has up to 512 GB of internal memory and 8 GB RAM.

The main feature of Huawei P30 Pro is its camera. It offers quad camera as a rear camera which has 40 MP (wide), 20 MP (ultrawide) and 8 MP Periscope. Moreover, it has a 5x optical zoom. For the Selfie camera, it uses a 32 MP camera. It has fingerprint under the display for unlocking, has fast wireless charging and has 4200 mAh inbuilt battery.

OnePlus 7 Pro has 256 GB internal memory with 12 GB RAM but doesn’t have an expandable memory slot. The main Camera consists of the triple camera with 48MP (wide), 8MP (telephoto) and 16MP(ultrawide) and has 3x zoom. The selfie camera is motorized pop-up 16 MP. The fingerprint is available for unlocking the phone which is under the display. It supports fast battery charging and has inbuilt 4000 mAh battery.

Google Pixel 3A has 64GB internal memory and 4GB RAM but doesn’t support expandable memory. It has a single camera of 12.2MP and selfie camera of 8 MP. It supports fast battery charging of 3000 mAh non-removable battery, has a fingerprint sensor at the rear side for unlocking the phone.

5 Fun Ways to Spend a Weekend in Toronto

Top 15 Highest-paid Musicians In The World 2019

Small towns in the USA are reeling under the devastation of...