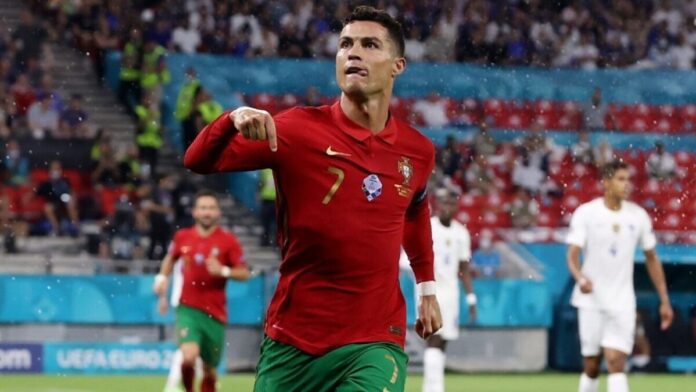 We can’t possibly talk about modern football and fail to mention Cristiano Ronaldo. The Portuguese international has scored more than 700 career goals and has played for major clubs such as Sporting CP, Manchester United, Real Madrid and currently for the Italian giants Juventus. The only other active player who has crossed the 700 goals mark is Lionel Messi, a player he has found himself with in exclusive groups for many years and whom he respects.

🗣 “I have always had a very cordial relationship with him.

“I shared 12, 13 or 14 years of award ceremonies with him. I never saw him as a rival. I always got along very well with him.” [Movistar]

Euro 2020 has been a real showdown, and Cristiano Ronaldo has been a star for his national team. Portugal dominated the game in the first half, and their pressure on France saw them awarded a penalty after Lloris’ attempted punching wiped out Danilo. Lloris was booked with a yellow card, and Ronaldo netted the first goal for the match.

Benzema was recalled to the national team after his international exile. The French international scored twice for his team against Portugal in what can be seen as the perfect comeback of a star of his stature.

However, all the glory went to Ronaldo after breaking Iran’s Ali Daei 109 international goals. Ronaldo gave his team a deserved lead from a penalty kick on the 27th minute. This was his 20th goal in the World Cup finals and European Championships, a new record. France seemed to be shaken by the goal, and their cohesion evaporated for some moments. Lucas Hernandez and Antoine Griezmann were booked in quick succession in what seemed like deteriorating discipline.

However, Benzema equalized through a penalty kick just before the first-half stoppage time, this was after referee Antonio Mateu Lahoz ruled that Nelson Semed had fouled Kylian Mbappe inside the box. Mbappe contributed a lot to the equalizer; at first, Pogba’s perfect pass made him shoot to the goal post, but the Portuguese keeper made a superb save. However, he was moments later on the ground after his contact with Nélson Semedo.

Benzema seemed to have been energized by the goal and was now ready to score more. Just after the restart, Benzema found the back of the net again after a superb pass from his teammate Paul Pogba. However, his celebration was cut short after the offside flag was raised. But luckily, VAR restored the goal, and the French side was leading by two goals to one.

Benzema made a brilliant finish to net his second goal and not forgetting that there was a double save from Rui Patrício in the same game. The penalty claim from Kingsley Coman towards injury time could have changed the whole story, but VAR ruled it out.

Portugal would have been out of the competition had Hungary won the match against Germany. However, penalty number three put Ronaldo on the spot again and beat Hugo Lloris to secure his 109th international goal. Jules Koundé was brought in for Benjamin Pavard, but Ronaldo’s strike from close range landed on his arm, and the referee pointed on the spot again. All eyes were on Ronaldo on this strike that was to take his team to the next stage and break the international record. He attained both after sending the French keeper the wrong way again.

Fernando Santos made some crucial changes for Portugal after losing 4-2 to Germany. He banked on the thrust of Renato Sanches and experience of João Moutinho and did away with Bruno Fernandes and William Carvalho, who had not shown so much vigor on the previous match. As a result, Portugal came out as stronger, better balanced and more solid from these changes; Moutinho’s free-kick into the heart of France bred a penalty kick and consequently the first goal of the match.

The best sportsbooks will be all eyes on Portugal as they take on Belgium on Sunday in Seville, while France will clash with Switzerland on Monday in Bucharest. The mouthwatering game had three penalties, which were all converted.

Three Horses To Watch Out For At The Preakness Stakes In...

The Best Freelance Taxes Calculator in 2021

How Technology Is Changing The Film Industry

EJ Dalius Shows You How to Market Your Small Business for...

Are psychic readings accurate over the phone?