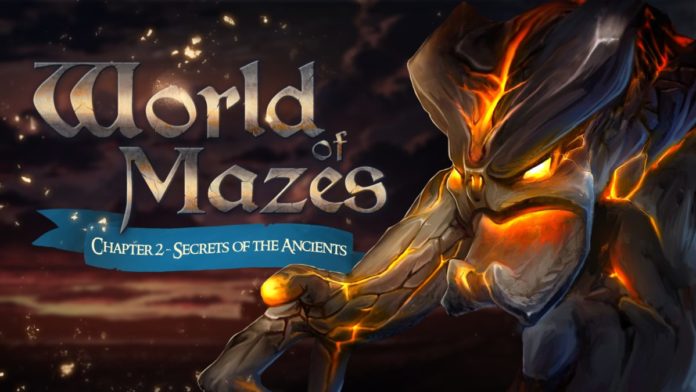 Welcome to the stage, World of Mazes, Chapters 1 & 2. But first, a little context. In truth, Virtual reality gaming is still mostly in its infancy. Even so, many of the game industry’s most esteemed developers have been wanting in on the action. Thus, flocking, in their droves, to work with this newly emerging, interactive medium, taking the world by storm.

For the most part, VR is all about issuing a heightened sense of immersion. A form of pure escapism that rouses our cerebral sensitivities. Distorting reality, to palpable levels of realism. Although much of its promise, as an interactive art form, remains untapped, now and then, we get a good glimpse at VR’s visceral potential.

That brings us nicely onto today’s topic. Welcome one and all to the World of Mazes Chapters 1 & 2. Ever since the first version of World of Mazes hit stores back in Feb 2018, over time, it has slowly but surely garnered a decent reputation. Along with considerable praise from the Oculus community. The new updated releases on December 2019 though have gained a lot of praise from fans waiting for more.

Not only as a rocksteady adventure RPG but also because of its unique immersive properties. Those of which coincide well with a direct enthesis on storytelling.

Now, this unorthodox blend may seem strange, especially in what is predominantly a puzzle game. Despite this, the central story undoubtedly acts in the game’s favor. As the driving catalyst, giving context and purpose to each innovative in-game puzzle.

Before we get way ahead of ourselves, though, let’s go back to basics. World of Mazes is a partially free-to-play VR game for the Oculus Go. Partially you say? The first chapter of the game is free with a few hours of gameplay (which is a lot of gameplay for VR) and if you are hooked on the storyline, the second chapter gets your money. Developed by RiseAngle, Inc, World of Mazes is, first and foremost, a single-player experience, with full support for the Touchpad, and Oculus Go Controller.

Overall, the primary goal is to make it from the start gate to the endpoint. Wherein, you’ll activate a portal. Thus, signifying the somewhat satisfying completion of each maze. But it’s not all plain sailing, as, along the way, you’ll encounter a wide array of obstacles and random events.

All of which alter, and hinder progression in exciting ways.

In terms of level structure, each maze opens in a Metroidvania style. As you interact with various objects and converse with a handsome host of complex characters, bit by bit, you’ll piece together fragmented portions of the puzzle. Not before long, and with a little perseverance, you’ll have gained enough insight as to the inner workings of each maze. And with it, a solution to freedom.

Now that we’ve addressed many core gameplay elements, let’s discuss the overarching story. Predominantly, the narrative revolves around a princess named Maya. Following your forced imprisonment, it’s now time to team up with Gelayon. A loyal servant of the Princess, who’s unexpected kidnapping has plunged the world into disarray.

Thankfully, you’re here to help. So, after solving the first maze, as an unstoppable duo, it’s onto the next. The task being, to search for our royal damsel in distress. At this point, I’d like to mention just how immersive each maze is. From a visual perspective, every level is unique, with its other-worldly aesthetic.

Additionally, each maze comes with its own set of flora and fauna, along with a series of distinctive environmental features. Thus, helping each one look and feel authentic. Along with that, there’s a wealth of imaginative creatures and characters inhabiting each arena. All of which set the scene to significant effect. Hence, adding a sense of magic, mystery, and enchantment. From minute one, there’s just so much to soak in.

All in all, there’s a decent contrast to each maze — both visually and from a design standpoint. For instance, the initial Aztec-like level, showcases stunning visuals, with lushly lit textures, and an overall vibrancy that’s pleasing on the eye. In truth, there’s a whole lot of polish and presentation on show here.

Then, compare that with levels like the Grezorth Maze. Overall, this is a much more ominous outing, both in terms of tone and atmosphere. By and large, each maze is a worthwhile venture, though, thanks to a ton of original concepts that help World of Mazes stand out from the crowd.

All in all, World of Mazes is a deeply immersive experience that makes clever use of its unique atmosphere and enveloping in-game ambiance. Better still, with a plethora of perplexing puzzles to wrack your brain over, and a solid story relayed through a series of compelling characters, ultimately, it’s hard not to fall in love with this sensory-heavy, hybrid RPG for the Oculus Go. Great stuff, indeed.

On that rather celebratory note, if you haven’t done so far, now is as good a time as any to check out World of Mazes. Especially while it still subscribes to the free-to-play model for the first Chapter. I’d suggest you hurry, though. It might not be in this state much longer.

What do you make of the World of Mazes? We’d love to get your take on the game. So please, feel free to chip in via the comments. We welcome your views.

Everything You Need To Know About The Next iPhone

4 Creative Ways to Grow Your Blog Audience in 2022

Major Dental Diseases and their Treatment

Ja’Net DuBois, the actress of “Good Times,” is no more