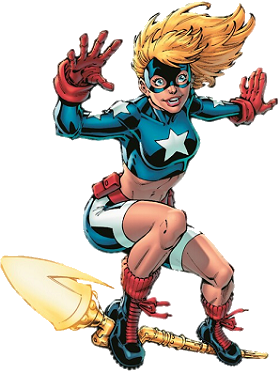 The DC superhero Courtney Elizabeth Whitmore, perhaps better known simply as Stargirl, has been making waves in the DC universe since her first appearance in comics in Stars and S.T.R.I.P.E. in 1999. More recently, the live-action television show, Stargirl, which first aired in 2020, has made this superhero’s name popular again. Without further ado, let’s take a look at some of the cast members who are working to bring this comic to life.

Of course, we need to start out with the actress who plays Stargirl herself, Brec Bassinger. Her character, as well as the show itself, was first written up by Geoff Johns, who imagined Stargirl as a spunky teenager who accidentally becomes a superhero after she discovers gear from the original Star-Spangled Kid. This gear later helped her to have her powers, which include superhuman strength, shooting dazzling (and blinding) stars, and cosmic energetic manipulation– to name a few.

Brec Bassinger has the spunky teenager role down, as she spent many of her formative years working for Nickelodeon on both live-action and animated television shows, including The Loud House, Bella and the bulldogs, and The Haunted Hathaways. Her role of Courtney Whitmore/Stargirl puts her in a more mature role than she has been in years past. Of course, Bassinger has also become more mature throughout the years, so the actress and the character seem to be a perfect match for each other.

Possibly the most famous person on the cast of Stargirl is Luke Wilson. He plays Pat Dugan, Courtney Whitmore’s stepfather. Of course, being a superhero show, their relationship can’t be as simple as that. After all, what is a girl to do when she discovers that her stepfather is also a supervillain?

Some of Luke Wilson’s most famous roles in recent years include Albuquerque in Zombieland: Double Tap, Henry Poole in Henry Poole is Here, and Richie Tenenbaum in The Royal Tenenbaums. He is scheduled to keep playing the role Of Pat Dugan throughout season two of Stargirl. In 2022, he will also play Detective Vargas in Gasoline Alley. He is also scheduled to be in the film Plus/Minus and New-Gen in upcoming years, but not much information is yet available on these projects.

One of the most infamous villains in the Stargirl comic series is the Dragon King. Stargirl’s arch-nemesis makes an appearance in twelve episodes of the show, both as his villain persona and as Dr. Shiro Ito.

Nelson Lee has recently come to fame, as he played the chancellor in the live-action Disney adaptation of Mulan. Before that, he mostly appeared in small roles on television shows, including playing Benedict Liu in Claws, Sheldon on Ten Days in the Valley, and Shen in Blade: The Series.

Stargirl is currently on its second season. To watch it for yourself, check out old and new episodes on HBO Max on the CW channel or app (which is free), on Hulu with episodes going on on the same day that it airs on television, on YouTube TV, Fubo TV, and on Direct TV Stream. However, it should be noted that the show’s streaming channels could change at any time, so when in doubt, turn to the CW, which airs the show on cable.

Michigan, Pennsylvania, and Others Badly Hit by Job Loss amid Corona

Need Help Writing Your Bio? Here’s What to Put in and...

The Ultimate Checklist for your Office Interior Design